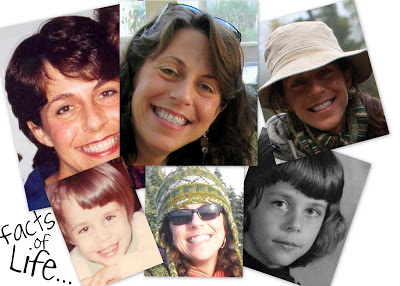 I've been doing some thinking about why I blog lately. It's funny, I read a lot of blogs and it seems that it's inevitable that at some point in time, usually every so often, my fellow bloggers seem to revisit this same question. Maybe the answer to this question is easier for some. For example, if I blogged about technology, my direction is pretty clear cut. To talk about what I had for supper last night might loose me a few followers. And gross you out. For some reason - mostly the ones I create inside my head - when I answer that question it gets quite complicated. I originally started blogging on the Friends of Theresa web site so that I could keep friends and family updated in regards to my health. I soon figured out that separating my health from my spiritual life was impossible. So spirituality became a subject. Then I actually started having followers other than my amazing circle of supporters and disease information, common experience and support became topics of interest and reasons to write. Mixed in with all of this is the emotional/psychological benefit of just writing. So quite often I sit here in front of my computer, longing to just write, but somehow wanting to satisfy all of these desires that tug at my heart. If I write about spirituality...well then, I might loose those who have opinions other than mine. This can be a tough one. It's easy to say, "Well...who cares?" Stand up for what you believe in. Well..I care. Not so much what you think of my views, but I care about you. And having an impact, making a difference, somehow making your life just a little bit better for one moment in time means a great deal to me. In the end... like Mother says, you can't always make everyone happy. Believe me, as the mother five daughters and the step-mother of two...I completely understand this concept! Nevertheless, it still causes time for pause - which is exactly what lead me to today.

I have decided that on Fridays I am going to dedicate the blog to divulging interesting little facts about my life. They'll be very random. This give me freedom to break some of my self made constraints. I'll try to mix it up a bit. Some health stuff, some family stuff, some "wow-I-can't-believe-you-just-told-us-that" stuff. Then, if you feel like it, the next part is yours...

I'm gearing up for winter here. It's hard enough, when the weather is good, for me to get out of the house. Winter typically brings with it a bit more "unhealthiness" as well as logistical problems. Actually getting out is just plain painful and difficult. So at the end of Friday Facts of Life, you will have the opportunity to tell me something interesting about YOU! This give me something to do! As well as fill my brain with new and wonderful ideas to write about. See...you have a purpose!!

I'm fully expecting that this idea is going to take some time to catch on. No worry. Whether I hear from you or not, you're still going to hear from me. Because, as mentioned early, it does me good to just write. It's a win/win no matter what!

I don’t have a belly button.   Yep, you read that one right! If we were sitting in a room together I would let this one ride for a while before I told you why. I’ve done it before and it’s just too much fun to hear people try to figure out how that happens. I have been known to convince small children that I am an alien, but I’m guessing you are all too smart for that one. The simple answer – after too many abdominal surgeries reconstruction gets a little tricky. There comes a time when you just have to say good-bye. Which I did, after the twins were born. That was in 1996. I’d show you a picture, but…well…maybe not.

I have one brother, no sisters. (I do have six sister-in-laws and two brother-in-laws) He lives in Louisiana, outside of New Orleans, with his wife and three young children. He has three adult children that live in Minnesota - near me - where I can love on them all I want! He’s better than a brother, better than a best friend, and grows dearer to me with each passing second of my life. At almost seven feet tall, he’s my larger than life hero. 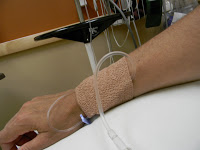 One of the issues I deal with because of my autoimmune diseases is peripheral neuropathy. The first indication I had of this was numbness in my hands and feet.  Limited to this, it’s no big deal. But most people don’t realize that these are also the same nerves that control muscles and major body organs. People with this type of nerve damage – like me – can have trouble digesting food, heart problems, bladder problems and issues with sweating.  This is the main reason why I get IVIg infusions every two weeks.

When I was a kid, I used to get a wig every year for Christmas.   Believe me, going back through old pictures is nothing short of hilarious...and a little bit embarrassing. But seriously, look at the examples I had to look up to. I was a bouffant in training. The year after this I was a blond. 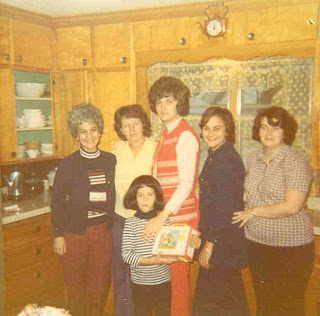 I’m a painter. I used to paint mostly botanical stuff. Very fine, detailed watercolor.  Since getting sick, I have ventured into the world of acrylic. Big, messy, bold and beautiful. I love it. I’m still learning. This is a picture of my daughter Anna. She is far from black and white, but the picture was fun to do since she has AMAZING eyes. 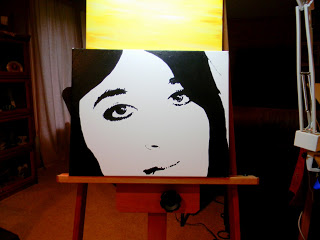 
Have a wonderful weekend!!

I have gotten quit a few emails stating that people are having trouble posting comments to my blog. I am currently researching the issue. In the meantime, feel free to click on the red envelope at the top of the page and send me an email! I will share comments as soon as I figure out the problem!
Love the comments so far!!!

I hopefully have resolved the issue with this new commenting format.
Feel free to comment!!

Holy crap! Who is that tall woman in the middle of your family photo?? It looks exactly like my mother when she was in her early 20's...no lie! I thought it WAS her for a second!

OK...an interesting tidbit for the Friday facts...I had two brothers and one sister (I lost one of my brothers when I was 16, he was 18), my grandmother raised me, I volunteered in my youth in a hospital and on the first aid squad, and I love food and to take pictures.

Wow, that is amazing! I am going to see if I can find a photo online of my mom and I will post it on your FB page.

I was so awed by the photo that I didn't do the Friday facts comment!

I am a 15 year cancer survivor (24 yrs. old when diagnosed with Hodgkin's Lymphoma).

I have never ever drank a cup of coffee, despite years working as a nurse on the night shift.

My dream is to go to Ireland someday!

Deb,thanks for the tidbits!! I absolutely love getting little pictures of your lives. This is going to be fun!
I'm sorry to hear about your brother. Going through that at 16 must have been very difficult. Do you live close to your other brother?
I was very close to both of my grandmothers. My mother's mother is still living - she's 90! And more "with it" than I am most days! I have so many wonderful memories with both of them.
And did you end up working in the health profession? What cool jobs to have when you were young! So many questions...so little time!! ;-)

Christine, WOW...Congratulations on 15 years!!!!!! What a story of hope!
(wish I could say the same thing about coffee...)

Ireland! My step-daughter Casey just spent a little over a month in Ireland and she is already planning her trip back. She just fell in love with the country and the people. Her dream is to actually live there. I can totally see her doing it.
I love having those kinds of dreams. My husband has been the one who has really taught me to keep those dreams alive - it's the only way they actually HAPPEN! For me, it meant letting go of having to figure out the "how" and just keep dreaming. It's funny how all of a sudden...there you are, experiencing one of your dreams and you wonder - how in the heck did THIS happen???
So KEEP DREAMING!! You'll get there, I'm sure!