Nothing teaches us more about ourselves than unwanted change. If you want to know exactly how attached you are to an idea or belief about yourself or the world in which you live, take note of the pain that arises when confronted with loss.

I had suffered loss in my life.  Moving from state to state at a young age, childhood sexual abuse and the dissolution of a 22-year-old marriage were just a few. Yet still I managed to keep hold of the identity that was “me”.  If fact, it was that very same identity that I paid homage to – in my mind, the very person that “saw me through” each difficult life situation and brought me victoriously to the other side.  And who was this “me”?  Given the opportunity, I would tell you that I was the mother of seven daughters, a wife, an artist, a writer, a marathon runner, an avid outdoors-person, a public servant, a speaker, a business analyst, an animal lover, a pastor’s wife, a Christian, a women, a daughter, a sister, a friend…. All of these identities, packed with experiences and laden with expectations were of no match for one single loss…

The loss of my health.

For me, this loss was not temporary.  In October of 2009, after completing the Twin Cities Marathon, I became ill with a number of diseases that would later be diagnosed as Lupus, Sjogren ’s syndrome and Rheumatoid Arthritis.
The first year of this difficult period of my life was spent in and out of the hospital. Mostly, in.  Pancreatitis kept me extremely ill and at one point, almost took my life. After two surgeries, my battle with this part of the disease could finally move forward, but the year I had spent on heavy narcotics to get there had left me with an entirely new challenge.  As weeks turned into months, and side effects separated themselves from symptoms, my new reality began to emerge.  Life would never be the same for me. And since “me” had been completely and utterly dismantled, I had no idea what this meant.

This began what I like to call my “fighting” phase. I describe it as such because that was exactly my mentality. Much like fighting to win a race, I was fighting to win my health.  During this phase hundreds of hours would be spent in doctor’s offices, on the web searching for information and reading all the books I could find about my diseases.  I looked for validation around every corner – a definition, a reason, a solution.  I do not know if one can avoid this phase or not.  In one regard, the knowledge I gained during this time is invaluable.  On the other hand, the perception I maintained of myself and of my situation was not very helpful.

Thankfully, it was during this fighting phase that my family and friends would prove to be a great source of strength and consistency.  People seemingly came out of nowhere. Faces I had briefly encountered in meetings or on the elevators at work were now sources of inspiration. Day after day, week after week, year after year, people I hardly know have consistently written emails, sent letters, visited me in the hospital and remained by my side. Early on, my co-workers and friends from work began pulling together resources and in December of 2009 a benefit was held for myself and my family. Through the organization of this benefit, the website www.friendsoftheresa.org was developed. This site provided family and friends a means by which my story could be told, benefit information could be posted and updates could be made in regards to my current health condition.  It also provided a way for followers to email me directly. This process of me writing weekly updates and receiving communication in return became a direct source of support  that carried me through many difficult days.

As the months progressed, and Long Term Disability gave way to Social Security Disability, I slowly began to enter the next phase of my journey – the “surrender” phase.  And within that phase, a gradual shift in consciousness, from hopelessness to freedom.  At first surrendering felt much like waving the white flag of defeat.  The feeling as if there were nothing more left for this illness to take from me. I suppose this is the point at which people begin to say things like, “Well, there’s no place but up from here” and “You have to hit rock bottom before things get better.” However, for me, this move in consciousness demanded something very different.  The bootstraps from the past were no longer there.  Where would I even go “up” from?  Who was I?

If not careful, one quickly fills that void without thinking.  In my case, moving from miracle mom to chronically ill patient was a pretty easy shift, but not really the identity I wanted to glom onto.  Little by little I have begun to understand the folly in this thinking.  It was not until I realized that in the letting go of these identities, true freedom can found.  I am. Period. And in this void of labeling I can experience each day without regret, without fear for the future or longing for what isn’t. By being fully and completely present in this very moment I have found myself in the open space of peace.  A space where breath comes easier and true happiness resides. Don’t get me wrong, my disease is still very real. Pain, frustration, doctor’s visits and hospitalizations are all still a very real part of my life – but they do not define me, and they do not take up a place within me. Even in my most miserable moments, pain overtakes, but the baggage and hopelessness that my mind used to attach to it are gone.  And without all the emotional turmoil there is much less suffering.

I am glad I no longer find myself in the fighting phase. To be honest, it’s an exhausting place to dwell. The amount of energy that goes into maintaining a perception (of which we never quite meet up to) is not only enormous, it’s endless.  As with any disease or illness, one has a very limited supply of energy each day.  These days I choose the way in which I spend that energy very carefully.  One interesting shift for me has been in regards to the website that I have been maintaining.  What began as a venue for me to give weekly updates in regards to my health has now transformed into something much different.  It became a place of awakening.  Without realizing it, the empty pages began to fill with the details of my journey into consciousness and the daily lessons that this journey was teaching me along the way.  And before I knew it, I had viewers from all over the world.

With this change, I moved from website to blog, and wpmama.com  was born.  It’s been an interesting transition, and I still get requests to continue the website, but the movement has been good.  Without any real idea of where it is going, or what it should be, for now…it just is. Kind of like me…I just am.  Living one moment at a time, in this one life I have been given.
Learning, letting go and living.

Star Prairie Gallery , the passion that sustains the artist that is my husband. 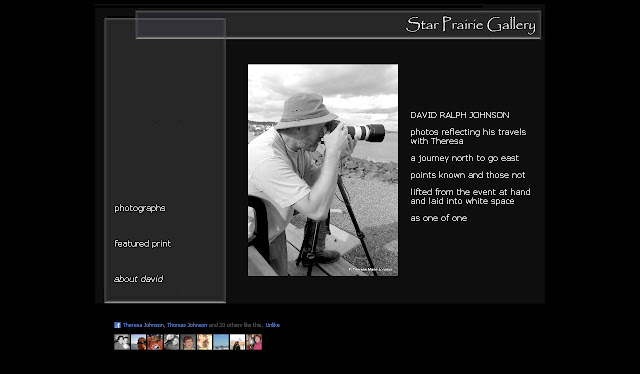