I was talking to my mother the other day about what some of our options might be if the Minnesota government shuts down for longer than a month. Worst-case scenario, we would have to move out of our home, downsize, and sell a few things…. There are all sorts of options.  Some a little more difficult than others, but none all that daunting.  I told her that nothing in this world – nothing – lasts forever, and the end of one journey only opens the path for the next one.  Towards the end of our conversation, she made this comment, “I think this spiritual thing you are on is really helping you.”

Yesterday was our Anniversary.  To be completely honest, if it were not for Facebook stating, under my Upcoming Events section, “Your Anniversary with David Johnson is today”, I don’t think either one of us would have remembered.  To some, that may seem completely unacceptable. A sign of careless disregard – thoughtlessness.  Quite the opposite. When your cup is full – it’s full.


For the past couple of months Dave has been trying to sell his motorcycle. It is a bike he has had for years and years, a 1984 Honda Magna. He owned it when I met him, and much of our courting took place on those two wheels.  And, every year when the spring air hits, it has been our favorite things to look forward to. Winding in and out the hills of St. Croix County at 45 mph is nothing short of heaven. However, we are getting older. Dave’s diabetes is a little more unpredictable, and my health is…well, you know the story.  The plan had been for Dave to sell the motorcycle and use the money to buy a new camera.  Photography is where his passion lies, and new cameras don’t come easy. We figure the bike is worth about one-half a mortgage payment.  Things change.

We sold the bike yesterday – on our Anniversary.  It’s been an odd couple of months dealing with the riff-raff which invades your life through the doorway of Craig’s List. Most, not even real human beings – computer generated emails consisting of offers to “buy you motocycle, happy to pay cash so email phone immediate please.”  For every one real person, there exist about ten computer bids.  Moreover, quite often that real person would rather swap 100 bottles of Red Bull or 20 Nintendo games instead of paying cash.  Getting to the real deal is frustrating to say the least. Dave sold the motorcycle to Jon.
He was a real as it gets.

When Jon and his friend Linda drove up in our driveway, Dave was busy trying to get the garage cleaned out for graduation and I was watering some flowers.  Up early, lots needed to be done on this beautiful sunny Saturday. The clock is counting down – only two weeks to go – really only one weekend.

The minute they stepped out of the car all ticking ceased.  Within minutes, Dave had determined that Jon had never owned a motorcycle.  A scooter, but not a motorcycle.  Yet, if enthusiasm alone could get the job done, Jon would be riding by afternoon. There was something very special  - very endearing about the way in which Jon went after his dream of owning a 1984 Honda Magna. After about 15 minutes of discussion, off they rode. Dave on the front, Jon smiling from ear to ear on the back.  I set up a couple of lawn chairs amongst the disarray of the garage and Linda and I began to talk.

She is a teacher in Minneapolis. Her husband a professor.  She explains to me in detail just sufficient to get the point across, that her friend Jon is very ill. No one, including his partner, is very excited about Jon getting this bike, but it is his dream.  I tell her about my health and the past couple of years. We talk about pets, taking in abused animals, raising children and how life is. Short and beautiful.  We share the most intimate of vignettes, this perfect stranger and I.

What seemed like only moments later, Dave and Jon returned.  Dave told me afterward, that the minute they got on the bike, he felt his role slowly change from salesperson to teacher. He felt a certain compassion and responsibility towards the safety of this new rider. I can envision this quite clearly as two of my husband’s best qualities are mentoring and patience.  It makes him an amazing father.

Money was exchanged, the title signed and an agreement made for us to ride the bike into Minneapolis so that Jon could practice safely on the streets of his own neighborhood and not on the four lanes of Interstate 35.


By 5:30pm the bike was parked out in front of Jon’s house.  I wish I could capture in words or photos the emotion of this moment.  Both seem to fall short.  What I can tell you is this – we are better people because of it.  Changed forever.

Emma was with us for the drop off. She was my riding partner as we followed Dave into the heart of Minneapolis.  As we drove off from the exchange, Dave felt it was appropriate to go somewhere “quirky” for supper. To celebrate.  We love when Dave says “quirky”. It usually means we will end up in Dinky Town or some obscure corner of Minneapolis or St. Paul. He knows both cities like the back of his hand and this always makes for an adventure.  We ended up in Dinky Town, at Annie’s Parlor.  We sat up on the rooftop and gorged ourselves with enormous sandwiches, a basket of fries, milk shakes, chocolate sodas and two cherry phosphates.  I had an exchange with a young woman that was wearing the exact same shirt that I had on – it was pleasant, full of laughter and real – like a long lost friend. I remember thinking I would miss her as she left – most likely never seeing her again. Glad that I picked that shirt from my closet earlier that morning.

As we left Annie’s, there were two men playing hacky sack on the side of the street. Emma and I saw them first. I could tell by their demeanor that they would most likely not have a problem with Dave taking pictures of them. So I yelled up the stairway for Dave to come down (as a rule, Dave lags behind…another wonderful quality!!) and take pictures of this incredible display of dexterity and general “coolness”. 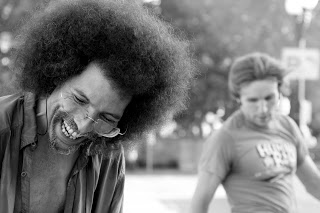 Bill and Pete were their names. Bill, the one with the great hair, was successfully completing day five of his sobriety from drugs. Joy surrounded him. He kicked and moved and jumped with the lightness of a child. Like the sun just kept filling him up. Like the air just kept lifting him a little higher. 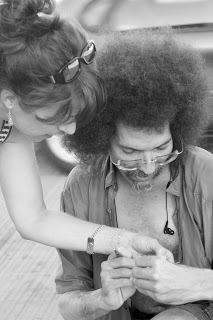 He talked about how he hadn't had his picture taken for over ten years. Around  the time he finished writing his first book. Which lead to the realization that we both found comfort in Emerson and Thoreau and some of the more contemporary spiritual writers of our time, like T.S Elliot, Gibran and Chopra. I told him of Tolle, he offered Smothermon’s Winning Through Enlightenment.  In the time it takes to stop at a traffic light, my heart had filled with compassion and a connection that left me longing for just a few more hours and a cup of coffee.  As we parted, I told him to “be well”.  I could not have meant that wish more than I did in that moment. In the simple speaking of the words, I hoped for the world.


We did not get the garage done yesterday.  In fact, I never even thought about it until we drove into the driveway.  What started our day at 5:30 in the morning is not at all what ended it.  It could have been so much different. And for over twenty five years of my life, it was.  Expectation, perfection, keeping up with the status quo and fear all kept me working for some glorious “end” that never seemed to arrive.  I jokingly commented on Dave’s Facebook wall the other day, after realizing our Anniversary was on Saturday, “ Well, we have finally arrived”.  Not that one ever really “arrives", but when the past no longer holds its grasp, and the future ceases to exist – the present moment becomes this vibrant, captivating doorway of unlimited possibility. Where vulnerability is worn like a brightly colored scarf and eyes and mouths and hands become instruments of pure authenticity. And there is nothing so beautiful and so fulfilling.

Yes, Mom, I do believe this spirituality stuff is helping me. And no matter what happens in this crazy life we live, be comforted in this –

Once again, I love reading your words. What a wonderful day you ended up having yesterday - oh and by the way, Happy Anniversary to you both! How wonderful to take the time with total strangers who are now friends. You and Dave are such very special people and yes, I'm sure you will be just fine.
Love you,
Alice

This entry was so nice! Seriously sounds like a very, very rare day in life. Love you! Koehler

I wish I could have met Pete and Bill!
Loved the entry mom :)

Anna, I thought of you the whole day...wishing you would have been with us. I love you SO much!! Mum

Susan read this to me from her smart phone in bed last night. What a nice note on which to end our day! Thanks.
*Jeana

That whole picture just makes me smile. Love to you both - Theresa